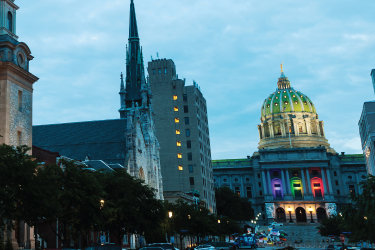 The Pennsylvania Office of Attorney General’s Civil Rights Enforcement Section is committed to safeguarding the fundamental liberties of lesbian, gay, bisexual, transgender, and queer/questioning individuals (LGBTQ+), and safeguarding their right to equal protection under the law. Even as public attitudes and legal protections have increasingly embraced LGBTQ+ people in recent years, much work remains to be done. Hate crimes against the LGBTQ+ community remain alarmingly high, according to FBI data. And discrimination against LGBTQ+ persons in employment, housing, public accommodations (generally meaning facilities open to the public), education, and other settings is still all too common. Statutory legal rights for LGBTQ+ persons must be protected, and strengthened where necessary.

LGBTQ+ rights in under federal law are still developing. Some federal protections are clear, while others remain unsettled.

Constitutional Liberty and Equality – the Supreme Court has held that the government may not deny gay and lesbian persons fundamental rights, or equal rights, including the right to marry.

Over 50 municipalities have passed ordinances prohibiting discrimination against LGBTQ+ individuals, including in larger cities such as Philadelphia, Pittsburgh, Allentown, Erie, and Reading. These local laws offer protection to about 1/3 of Pennsylvania’s population in access to housing, employment, and public accommodations.