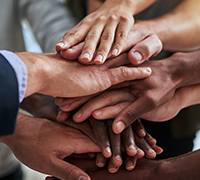 This web page summarizes federal and state law relevant to combatting hate crime – including the rights afforded by the U.S. and Pennsylvania Constitutions, as well as federal and state criminal and civil statutes.  In addition, listed are the federal and state agencies you can contact if you have been subjected to hate, bias, or discrimination.

The First Amendment of the U.S. Constitution prohibits federal and state governments from interfering in our most precious rights, including, among others: freedom of speech, press, free exercise of religion, and assembly.  The First Amendment of the U.S. Constitution generally protects even unpopular ideas from government prohibition. Thus, words or other forms of expression are not unlawful merely because of their hateful content.  Moreover, people cannot be prosecuted simply because of their hateful beliefs, or because they belong to groups with hateful beliefs.  In addition, if a person commits a crime, the fact that the perpetrator holds hateful beliefs does not automatically make it a hate crime.

The Fifth and Fourteenth Amendments of the U.S. Constitution guarantee the right to due process, which provides a safeguard from arbitrary denial of life, liberty or property, and also guarantee equal protection under the law.

The Constitution of the Commonwealth of Pennsylvania is substantially equivalent to the United States Constitution.  Article I, Sections 1, 3-4, 7, 9, 28.

A number of federal hate crime laws are enforced by the Federal Bureau of Investigation and the U.S. Department of Justice:

The Matthew Shepard and James Byrd, Jr. Hate Crimes Prevention Act of 2009, 18 U.S.C. § 249 – The Shepard-Byrd Act makes it a federal crime to willfully cause bodily injury because of the victim’s actual or perceived race, color, religion, national origin, gender, sexual orientation, gender identity, or disability.  The Act also covers attempts to cause bodily injury to victims through the use of a firearm, dangerous weapon, explosive, or incendiary device.

Conspiracy Against Rights, 18 U.S.C. § 241 – This statute makes it unlawful for two or more persons to conspire to injure, threaten, or intimidate a person in any state, territory, or district in the free exercise or enjoyment of any right or privilege secured to him or her by the Constitution or the laws of the U.S.

Deprivation of Rights under Color of Law, 18 U.S.C.  § 242 – This statute makes it a crime for a person acting under color of any law to willfully deprive a person of a right or privilege protected by the Constitution or laws of the United States. For the purpose of Section 242, acts under “color of law” include acts not only done by federal, state, or local officials within the their lawful authority, but also acts done beyond the bounds of that official’s lawful authority, if the acts are done while the official is purporting to or pretending to act in the performance of his/her official duties. Persons acting under color of law within the meaning of this statute include police officers, prisons guards and other law enforcement officials, as well as judges, care providers in public health facilities, and others who are acting as public officials. It is not necessary that the crime be motivated by animus toward the race, color, religion, sex, handicap, familial status or national origin of the victim.

Violent Interference with Federally Protected Rights, 18 U.S.C. § 245 – The primary portion of the statute used in civil rights prosecutions is subsection (b)(2), which prohibits using force or threats to interfere with various enumerated activities because of race, color, religion, or national origin.  The activities protected by subsection (b)(2) include attending public school; enjoying any state-provided facility or activity; working or seeking private or state employment; serving as a juror; using facility of interstate commerce; and enjoying any public accommodation.

Damage to Religious Property, Church Arson Prevention Act, 18 U.S.C. § 247 – This statute prohibits defacement or destruction of religious property based on a property’s racial characteristics.  It also prohibits defacement or destruction of such property based on the religious characteristic of that property if the offenses is in or affecting interstate commerce.  Finally, it prohibits using force or threats to obstruct a victim’s free exercise of religion.

Criminal Interference with Right to Fair Housing, 42 U.S.C. § 3631 – This statute prohibits the use of force or threat of force to interfere with enumerated housing rights (selling, renting, purchasing, occupying) when motivated by bias based on race, color, religion, sex, handicap, familial status and national origin.

In Pennsylvania, what is commonly referred to as “hate crime” is covered in Pennsylvania’s Crimes Code as Ethnic Intimidation (18 Pa. C.S.A. § 2710). The crime of Ethnic Intimidation occurs when a person commits certain other crimes and is motivated in whole or in part by hatred toward the race, color, religion, or national origin of another person or group. For example, the offense of Ethnic Intimidation may be charged when certain underlying offenses are also charged – such as criminal mischief, assault, harassment, terroristic threats, stalking, and homicide – and the underlying offense was in whole or in part motivated by race, color, religion, or national origin.

When a person is the victim of the crime of Ethnic Intimidation (18 Pa. C.S.A. § 2710), Pennsylvania law provides for Civil Redress (42 Pa. C.S.A. § 8309). The law allows individuals to file a civil rights lawsuit against the perpetrator of a hate crime or crimes relating to institutional vandalism to obtain money damages and a court order directing the criminal activity to stop. The Pennsylvania Attorney General, in consultation with the district attorney, may also file a civil lawsuit to obtain a court order to stop the activity or for other equitable relief.

What Should You Do If Subjected to Hate?

If it is an emergency, call 9-1-1.  If it is not an emergency, and you think you are a victim of a hate crime, you should report it to the local police.  There are hundreds of local police departments in the Commonwealth of Pennsylvania.  You should contact the one nearest you.

You should also report hate crimes to:

For hateful incidents which may not necessarily be crimes, you should also contact local, state, or federal civil rights enforcement agencies for investigation and potential civil remedies for discrimination in an array of contexts.  Key agencies include (not exhaustive):