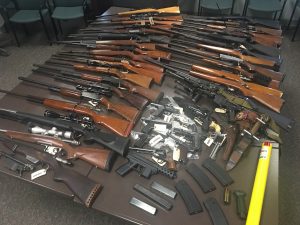 The eight defendants were charged today with corrupt organizations and possession with intent to deliver a controlled substance, both felonies.

“These drug and illegal gun dealers sold thousands of dollars in heroin and crystal meth every day for over a year in Stroudsburg and surrounding areas until our investigators and law enforcement partners shut them down,” Attorney General Josh Shapiro said. “We also seized 39 illegal guns during the course of our investigation. The people of Monroe and Carbon Counties are fed up with drugs and illegal guns in their communities. I hear them, and today we shut this ring down.”

Working with detectives from the office of Monroe County District Attorney E. David Christine, Jr. and the Pennsylvania State Police, Office of Attorney General agents identified Eric Waldron*, 45, of Saylorsburg, as the ringleader of the drug ring. Investigators learned the ring’s main supplier of illegal guns was Eric Borger, 55, of Kunkletown. The heroin supplier was Dorthea Price, 57, of Albrightsville. The crystal meth supplier was William “Spanky” Shannon IV, 43, of Stroudsburg.

Starting last September, agents began making a series of controlled drug purchases from ring members. Some of the heroin bought during the investigation was believed to contain fentanyl, an opioid pain medication that is 100 times more potent than morphine.

Following Waldron’s incarceration last October on unrelated charges, his girlfriend, Paula Brown*, 39, of Long Pond, told an informant she was now running the ring. During one drug buy, Brown told the informant she could sell a gun – but first needed to discuss it with Waldron. Brown later sold a .22 caliber handgun to the informant.

Through the execution of search warrants on residences in Monroe and Carbon Counties, investigators seized 39 handguns, shotguns, rifles, assault rifles and ammunition, as well as heroin, crystal meth, pills, other drugs and drug packaging materials.

In addition to the drug dealers previously named, these additional defendants were charged today:

“These arrests today are a great example of strong law enforcement cooperation,” Attorney General Shapiro said. “I want to thank District Attorney Christine, the Pennsylvania State Police and every local police agency that helped get these dealers, the drugs and illegal guns off our streets in Carbon and Monroe counties.”

Five defendants are in custody and were arraigned today before Magisterial District Justice Colleen Mancuso. Three remain at large. Bail was set at $250,000 for the arrested defendants. A preliminary hearing is scheduled for Friday, July 6. The case will be prosecuted by Senior Deputy Attorney General Timothy Doherty.

If you witness a drug deal in your neighborhood, report it to the Office of Attorney General. Concerned citizens can send an anonymous tip to the office by texting PADRUGS + YOUR TIP to 847411.