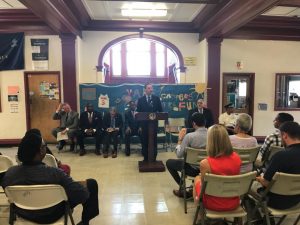 PHILADELPHIA — Attorney General Josh Shapiro today announced a new, joint effort between his office, city and federal law enforcement partners to act with an unprecedented level of cooperation to target illegal gun trafficking in Philadelphia. The announcement was held at a recreation center in the Point Breeze section of Philadelphia, a community struggling with a proliferation of violence and guns.

“More information-sharing and stronger collaboration is critical to effective law enforcement operations, particularly when it comes to targeting criminals who traffick in illegal guns and plague our communities,” Attorney General Shapiro said.  “We’re proud of the work that our Gun Violence Task Force has done already in Philadelphia, and working together with our city and federal partners, we know there is much more we can do to combat gun violence and help make our communities safer.”

“Gun violence is a public health and a public safety threat, and we’re working together as law enforcement partners to reduce those threats,” Shapiro said. “We came to Vare today because it is a city recreation center – which should be a refuge for children. Too many of our kids are being exposed to gun violence from the time they are toddlers. That trauma lives with them as they become adults, and that is a cycle we must stop.”

The Attorney General’s Gun Violence Task Force, a city-state partnership through which Office of Attorney General agents work alongside Philadelphia police and the District Attorney’s Office, has been targeting illegal gun traffickers for more than a decade.  In that time, the Task Force has recovered 2,438 illegal guns and arrested 1,439 perpetrators involved in straw purchasing, gun trafficking and related criminal activity, with a conviction rate of nearly 80 percent. In 2018 alone, the Gun Violence Task Force has recovered 80 guns, made 75 arrests and opened 328 investigations.

This spring, the Office of Attorney General, Philadelphia police and the District Attorney’s Office reached an agreement with Philadelphia ATF to share more information and conduct joint investigations into illegal gun trafficking.  Through this initiative, investigative teams consisting of one ATF Agent, one Office of Attorney General Agent and one Philadelphia police detective work together to coordinate leads from their respective agencies, conduct interviews and gather evidence to target individuals who perpetuate gun violence, namely straw purchasers.  Since April, this new, joint collaboration has resulted in 94 leads being investigated and 12 arrests.

In July, Philadelphia police conducted a traffic stop and discovered a large amount of explosive devices in the car.  Through information sharing with ATF, agents searched the suspect’s home and made an arrest.  ATF then announced a Philadelphia man suspected of planting explosive devices on ATM machines in the city was in custody.  The Office of Attorney General will lead that prosecution.

“This joint initiative is a perfect example of ATF’s dedication to working with our state, local and federal partners in identifying, targeting, and investigating violent criminals who prey upon innocent citizens and lessen the quality of life in our neighborhoods,” said ATF Special Agent in Charge Donald Robinson. “Our neighborhoods deserve to exist without fear and intimidation inflicted by all violent offenders and we will continue to work with our partners at the Attorney General’s Office and Philadelphia Police Department to impact the violent crime that has done so much damage to a number of our neighborhoods in Philadelphia.”

On July 5, the Office of Attorney General announced felony charges against two Northeast Philadelphia men for the straw purchases of 11 handguns.  During the search of one of the men’s residences, investigators found cocaine, heroin, two ballistic vests, more than $2,000 and another gun with 30 live rounds.  This case was also built with strong cooperation from community stakeholders in the Northeast.

“We are excited to participate in this inter-agency law enforcement initiative,” said Philadelphia Police Commissioner Ross. “We anticipate that our collaborative effort will serve to further our over-arching mission to prevent and reduce violent crime, and improve the quality of life for the residents of our great city.”

On July 26, a warrant sweep operation stemming from the new partnership was executed resulting in 10 arrests on charges related to illegal gun trafficking and related offenses.  So far in this ongoing investigation, law enforcement agents have recovered 12 guns.