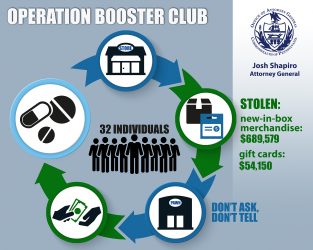 HARRISBURG – Attorney General Josh Shapiro today announced charges against the owner of two Bucks County pawn shops and four of his employees, along with 27 professional retail thieves, for their roles in a scheme to steal, pawn and resell $700,000 in merchandise from national chain stores.

During the course of a year-long investigation with Falls Township police, the Bucks County District Attorney’s Office and other agencies, Attorney General’s agents learned that employees from Levittown Quick Cash Trading Post and Morrisville Loan & Pawn purchased 5,000 stolen items at one third of their retail value from professional thieves who stole them from the stores.

The pawn shops resold the unopened, brand-new merchandise on eBay or other online retailers at full value. The professional thieves – known as “boosters” – used their share of the illegal proceeds to fuel heroin and opioid addictions.

“These pawn shop workers and their owner knew they were buying stolen merchandise at 30 cents on the dollar, but they were blinded by their own greed,” Attorney General Shapiro said at a press conference today at the Falls Township Police Department in Bucks County. “They profited on the addictions of the booster thieves and their desperation for money to feed their addictions.  Today we’re holding the pawn shop owner and workers accountable, and we’ve shut this scheme down.”

The investigation began after loss prevention agents at several large stores, including Walmart, Target, Home Depot, CVS and Giant Foods, noticed a significant uptick in thefts from their stores in southeast Pennsylvania and New Jersey.

These agents tracked “boosters” of their products to area pawn shops, including Levittown Quick Cash Trading Post and Morrisville Loan & Pawn. They shared their concerns to Falls Township police, who enlisted the Bucks D.A.’s Office and county detectives.

As the investigation grew, police discovered it was a multi-county operation involving at least four other stores, one in Philadelphia, two in Delaware County, and one in Montgomery County. Bucks authorities contacted the Attorney General’s office in late 2016, which coordinated the investigation moving forward.

Attorney General’s agents and prosecutors used an array of investigative tools to gather evidence, including court-approved electronic surveillance, and brought the case to a Statewide Investigative Grand Jury that recommended the charges.

The scheme was big business for the pawn shops.  Their employees bought and resold stolen merchandise with a retail value of nearly $700,000. The pawn shops paid about $229,000 to the “boosters” for all the stolen goods. The pawn shops pocketed the difference – over $470,000.

The merchandise was often still wrapped and brand-new in the box.  It ranged from beauty products to kitchen appliances, Ninja blenders to computer hard drives. The “boosters” stole kitchen faucets and blenders and vacuum cleaners.

The pawn shops’ owner and his employees operated under a “don’t ask, don’t tell” policy – as long as the thieves did not say the items were stolen, the pawn shop employees never asked.

“They knew it was stolen merchandise, but they were blinded by their own greed,” Attorney General Shapiro said at the news conference, where he was joined by Falls Township Police Chief William Wilcox and other officers, as well as prosecutors and agents from his office.

Noting the booster thieves’ addictions, Attorney General Shapiro said his office would take steps to ensure that treatment was made available to those defendants as their cases move forward.

“This case demonstrates the growing reach of the opioid epidemic and the greed of those who would take advantage of those struggling with the disease of addiction,” Attorney General Shapiro said. “We cannot arrest our way out of this epidemic. We need more treatment options – something I’m advocating for across the Commonwealth and in Washington.”

Shapiro noted that the need for treatment included the “boosters” arrested as part of this ring. He also stressed the multi-pronged actions his office is taking on the epidemic, including arresting on average five drug dealers a day, stepped-up enforcement against illegal diversions of prescription drugs – arrests are up 72 percent – and a national investigation of opioid manufacturers and distributors in which Pennsylvania is one of the lead agencies on the case.

To read the full Statewide Grand Jury presentment on this case, click here.