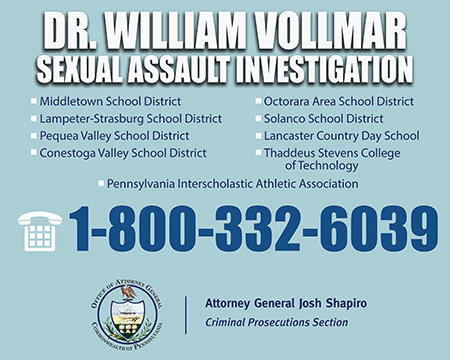 Dr. Vollmar was also a medical support member for the Pennsylvania Interscholastic Athletic Association for district and state athletic competitions and a member of the PIAA Sports Medicine Advisory Committee. Dr. Vollmar worked with PIAA for 19 years, putting him in regular contact with many children. This included tournaments in Hershey and Shippensburg where children were competing.

“Dr. Vollmar’s position of authority and public trust gave him widespread access to minors—these four victims have reported that he manipulated that trust to abuse them,” said Attorney General Josh Shapiro. “This is the beginning of our case to hold this sports medicine doctor accountable, and we encourage anyone with information to contact us. I’m grateful for the strong collaboration between my Office and the Pennsylvania State Police to listen to victims’ reports and investigate every lead.”

“Medical professionals are entrusted to care for people when they are most vulnerable, and every patient deserves to feel safe inside their doctor’s office,” said Captain Bruce W. Williams, commanding officer of Troop J, Lancaster. “We will continue to work with our local, state, and federal law enforcement partners to investigate those who abuse this trust and seek justice for their victims.”

The experiences of the four survivors who came forward with their stories are similar. They report that during sports massages that sometimes occurred at Dr. Vollmar’s private residence, he would inappropriately touch their genitals without consent. One on occasion, the doctor reportedly asked the patient if he was “cool,” and then began performing oral sex on him. At least two of the survivors said they were assaulted by Dr. Vollmar while attending Conestoga Valley High School. One of the survivors was reportedly assaulted by Dr. Vollmar in the Conestoga Valley High School Athletic Trainer’s room.

“I want to thank the brave survivors who have come forward and shared with our investigators their traumatizing experiences at the hands of Dr. Vollmar,” said Attorney General Shapiro. “I understand how difficult it is to come forward with information about such a sensitive topic, but the voices of survivors are our most powerful weapon to bring predators to justice.”

The investigation into Dr. Vollmar’s misconduct is ongoing, and the Office of Attorney General believes there may be additional victims or witnesses. Anyone with any information is encouraged to call the Dr. Vollmar Sexual Assault Investigation Hotline at 1-800-332-6039.

“I strongly encourage anyone with any information about Dr. Vollmar to contact our special hotline at 1-800-332-6039,” said Attorney General Shapiro. “Parents of children who have been treated by him should have a conversation about their experiences, regardless of how old they are now. My Office will pursue every allegation of sexual abuse wherever we find it— whether it is in a doctor’s office, in a school or university, or in a church. We will hold sexual predators or institutions covering up abuse accountable for their crimes under Pennsylvania law and work tirelessly to achieve justice for the survivors.”

The case will be prosecuted in Lancaster County by Assistant Chief Deputy Attorney General Daniel Dye.