Dealers in Ring that Sold 780,000 Bags of Heroin Worth Nearly $8 Million 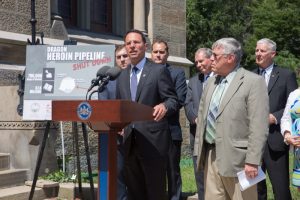 Harrisburg — Attorney General Josh Shapiro today announced that two defendants pleaded guilty to felony drug charges and were sentenced to prison for their roles in a large drug ring that sold nearly $8 million in heroin in Blair and Cambria counties.

Melissa Coleman, 44, of Stackhouse Street, Johnstown and Blaine Jackson, 41, of Chandler Avenue, Johnstown pleaded guilty to corrupt organizations and possession with intent to deliver drugs. Jackson pleaded guilty to possession of a firearm by a former felon and receiving stolen property. Coleman was sentenced to four to eight years in jail, and Jackson was sentenced to nine to 18 years behind bars.

Coleman and Jackson were among 16 defendants charged in July 2017  for their roles in operating the “Dragon Heroin Pipeline” that sold 780,000 bags of heroin in Blair and Cambria counties worth $7.8 million over 13 months. The ring also sold cocaine worth $1.9 million.

“This case involved dealers transporting large amounts of heroin and cocaine from Philadelphia to Altoona and Johnstown,” said Attorney General Josh Shapiro. “Our work with Blair County District Attorney Consiglio and other state and local law enforcement agencies allowed us to dismantle a major drug pipeline in Blair and Cambria counties. The community got a measure of justice today, and these criminals face lengthy periods of incarceration. Whether it’s dismantling a large drug ring or arresting street-level dealers, we’re doing whatever it takes to make the streets of Altoona and Johnstown safer.”

Jury selection and trial for the other defendants connected with the “Dragon Heroin Pipeline” is scheduled for June. Among these defendants is the pipeline’s ringleader, Damon “Fat Cat” Devine.