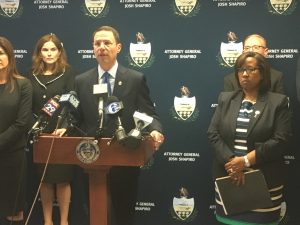 Wallace Hill, 62, of Philadelphia, a Translator at Poll 43-7 in the 197th House District special election in March 2017, pleaded guilty today in Philadelphia to failure to perform duty and was sentenced to 18 months’ probation and disqualified from voting for 4 years. The sentencing took place before Common Pleas Court Judge Scott DiClaudio.

“My job is to uphold Pennsylvania law to ensure free and fair elections,” Attorney General Shapiro said. “With this guilty plea and sentencing today, each of the four defendants in this matter have pleaded guilty or acknowledged their roles in this election fraud. When the people running our elections fail to follow the law, it undermines citizens’ faith in our democracy.”

When Attorney General Shapiro announced charges against Hill and three other city election workers last October, he detailed illegal activities that impacted voters on Election Day in the 197th District at one polling place in particular – Poll 43-7 at the Esperanza Health Center at Kensington and Allegheny Avenues in the 43rd Ward.  The charges against the four election workers detailed harassment and intimidation against voters who wanted to vote for candidates of their choice – but not the candidate being pushed by the city’s Democratic Party machine.

With Hill’s guilty plea and sentencing, it marks four out of four election workers charged in the case who have either pleaded guilty to charges or, in one case, been accepted into an accelerated disposition program.

In the other election fraud cases previously resolved, Thurman George, a Machine Inspector at Poll 43-7, pleaded guilty frauds by election officers, a third-degree felony, last month and was sentenced to five years’ probation and disqualified from voting for four years.

Calvin Mattox, a Minority Inspector at Poll 43-7, pleaded guilty to not meeting the qualifications of election officers for living outside the district where he was working. He received one year of probation and cannot vote until April 4, 2020. Dolores Shaw, the Judge of Election at Poll 43-7, received accelerated rehabilitative disposition (ARD) for compromising the local election board.

To help prevent future election or voter frauds in Philadelphia, the Office of Attorney General also created a Voter’s Rights Guide. The office also created a guide for campaigns to follow so that campaign staff and poll watchers better understand how to follow Pennsylvania law. The voters’ rights guides are available for download on the Office of Attorney General’s website in English and Spanish at www.attorneygeneral.gov/voting.

“These guides are designed to help voters understand their rights and what they can and can’t do at the polls,” Attorney General Shapiro said. “The guides also outline what election workers and poll watchers can and can’t do — so voters can properly report any illegal activity they see on Election Day.”