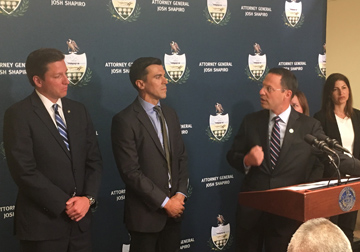 GREENSBURG — A Catholic priest in the Diocese of Greensburg, John Thomas Sweeney, pleaded guilty today to committing a sexual assault against a 10-year-old boy. Sweeney pleaded guilty to one count of indecent assault at a hearing in Westmoreland County Common Pleas Court. Sweeney was arrested and charged with assault last summer by the Office of Attorney General Josh Shapiro.

“When I stood here just over one year ago to announce charges against this priest, many congregants expressed their disbelief that the allegations could possibly be true,” said Attorney General Shapiro, in a news conference following Sweeney’s plea at the Westmoreland courthouse. “I understood their instinctive reaction. I understand it’s hard for someone of faith to imagine that a trusted leader could have done something so despicable.  But today there is no doubt, John Sweeney is accepting full responsibility and admitting what he did.”

“Josh is a hero to come forward to tell his difficult truth about Sweeney because of his concern that other children could be harmed if Sweeney were not held accountable,” Attorney General Shapiro said. “Once a victim finds the courage to come forward, law enforcement should take action. For his crime, Sweeney has pleaded guilty before the court in Westmoreland, and before the citizens of the Commonwealth, to the sexual abuse of a child.”

Sweeney was indicted last year by a Statewide Investigating Grand Jury probing sexual abuse by priests and clergy against children in six Catholic dioceses in Pennsylvania, including the Diocese of Greensburg.

According to the grand jury’s presentment, while in 4th grade at St. Margaret Mary Catholic School during the 1991-92 school year, the victim, Josh, was sent to Sweeney for discipline because he had been disruptive on a school bus.  The grand jury found that Sweeney used his authority and position as a priest, under the guise of a disciplinarian, to force the victim to perform oral sex on Sweeney in a conference room next to Sweeney’s office inside the St. Margaret Mary Parish.

Sweeney continued in ministry as a priest for approximately 16 years after abusing the victim. Sweeney was assigned to various parishes during his tenure as a priest in the Diocese of Greenburg. Sweeney’s assignments:

“If anyone is aware of other incidents involving this man, or if you yourself were a victim, I urge you to come forward,” Attorney General Shapiro said. “As we’ve shown today, we can and we will hold them accountable.”

Sweeney’s guilty plea comes as the Office of Attorney General Shapiro has been engaged in an intense legal proceeding concerning the publication of the Grand Jury’s report detailing widespread sexual abuse by more than 300 priests in six dioceses across Pennsylvania. Last week, the Supreme Court of Pennsylvania issued an opinion and ordered that the Grand Jury’s report should be released no later than August 14.