Last Year, AG Shapiro Announced Takedown of Drug Ring that Sold 780,000 bags of Heroin Worth $7.8 Million in Altoona and Johnstown 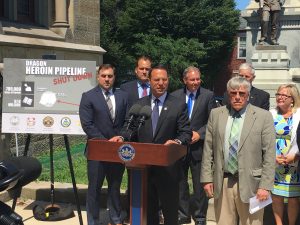 Last year, Attorney General Shapiro and the Blair County District Attorney’s Office arrested 16 other dealers for operating the ring, which flooded the streets of Altoona and Johnstown with huge amounts of heroin trafficked from Philadelphia over a 13-month period.

The ring sold 780,000 bags of heroin in Blair and Cambria counties. The dealers also sold cocaine worth $1.9 million.

“This investigation involved dealers who transported large amounts of heroin and cocaine from Philadelphia to Altoona and Johnstown,” Attorney General Shapiro said. “Our work with the District Attorneys of Blair and Cambria Counties and other law enforcement agencies led to the dismantling of a major pipeline that trafficked $7.8 million in heroin and $1.9 million in cocaine. We shut down this pipeline, but our investigation didn’t end. Our investigators kept digging, and today we’re announcing charges against nine more dealers for peddling this poison.”

“Let me be clear: We will never stop investigating drug dealers and criminal activity wherever we find it – in the streets of Altoona and Johnstown, in Philadelphia or Pittsburgh – anywhere we find it across our Commonwealth,” Attorney General Shapiro said.

The ringleader of the Dragon Pipeline, Damon “Fat Cat” Devine, was arrested last year following a joint investigation led by the Office of Attorney General that included the District Attorneys of Blair, Cambria and Montgomery counties, Altoona and Johnstown police, Pennsylvania State Police, and the Blair and Cambria County Drug Task Forces.

Devine is currently incarcerated, awaiting trial, as are most of his associates. One of his fellow dealers, Barbara Tyler, pleaded guilty to dealing in proceeds, criminal conspiracy to deliver a controlled substance and other charges in April. She was sentenced to 48 – 120 months in jail.

The case is being prosecuted by Senior Deputy Attorney General David C. Gorman.

Please click here for a video from Attorney General Shapiro on today’s arrests.