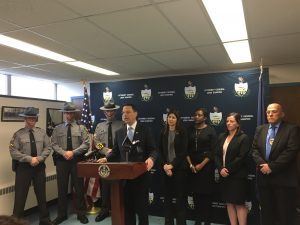 HARRISBURG — Following the arrest of seven Lackawanna County prison guards for participating in a pervasive culture of sexual assault of women inmates over many years, Attorney General Josh Shapiro announced today that a sixth guard accused in the case has been ordered to stand trial following a preliminary hearing.

George Efthimiou faces criminal charges of involuntary deviate sexual intercourse after the Office of Attorney General’s year-long investigation culminated in criminal charges against seven prison guards who used their positions to manipulate and dominate female inmates, perpetuating a culture of sexual assault at the prison that existed for many years.

“We believe there may be other victims or witnesses,” Attorney General Shapiro said. “You don’t have to be afraid of these men anymore. I’m asking you to call a Special Hotline we’ve set up to hear from you. If you have any information about this culture of sexual assault at the prison, call us at 570-846-4074. We’ve already heard from some people in positions of power in the county about this culture of abuse. Now, we want to hear from you.”

Former guards George T. McHale, James Walsh, John Shnipes, Jeffrey Staff and Mark Johnson were previously ordered held for trial. The last preliminary hearing for one of the guards, Paul Voglino, is scheduled for May 9. The investigation is active and ongoing.