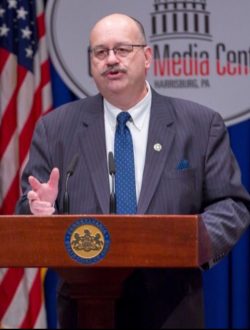 David Shallcross has worked to protect our communities for over 30 years. In 1986 he was appointed as a Deputy Sheriff with the Bucks County Sheriff’s Office. He next became the Community Resource Officer and provided crime prevention programs throughout the county, then Dave served as an Investigator to create the new Warrant Service Unit within the Fugitive Division and was later promoted to Warrant Specialist in charge of the fugitive division. Dave served as a Law Enforcement Liaison for a Federal Contractor and was assigned to special projects for the U.S. Department of Homeland Security from 2007-2008; in 2008 Dave joined the Office of Attorney General as a Community Liaison in the Public Protection Division’s Elder Abuse Unit. In this capacity he has conducted hundreds of seminars and senior expos. He was promoted to Senior Community Liaison and Coordinator of the Elder Abuse Unit in 2011.