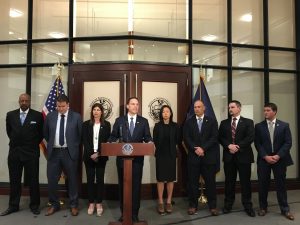 HARRISBURG — Attorney General Josh Shapiro announced that the nurse who failed to provide care for a patient at Cathedral Village in Upper Roxborough was held for trial today following her preliminary hearing. The patient, Herbert R. McMaster, Sr., 84, was left in the lobby of the facility and died 8 hours after suffering a fall and serious head injury.

Christann Gainey, 30, of Earp Street, Philadelphia, is charged with neglect of a care-dependent person, involuntary manslaughter and tampering with records in connection with the April 13 death of Herbert R. McMaster, Sr. Documents showed that Gainey failed to administer a total of eight required neurological checks to Mr. McMaster after he had an unwitnessed fall at the facility on the night of April 12. These neurological checks could have indicated the severity of his injuries and steps could have been taken to save his life.

“When a family selects a senior living facility, they do not expect their loved one to be found dead in the lobby of a place that was supposed to be caring for him,” Attorney General Josh Shapiro said. “This nurse ignored her job responsibilities, falsified paperwork, lied to her supervisors and neglected Mr. McMaster, who died. We’re holding her accountable and today, the court ordered the nurse held for trial on all charges.”

Attorney General Shapiro also commended the General Assembly and Governor Wolf for passing and signing into law House Bill 1124, which was sponsored by Representative Jim Cox and expands the authority of the Office of Attorney General to prosecute abuse and neglect of seniors. The bill gives the Office of Attorney General jurisdiction to investigate and prosecute those who physically abuse seniors in nursing homes. It also increases the office’s ability to prosecute neglect cases by removing the need to prove that actual physical injury occurred in order to establish the charges.

The Gainey case is being prosecuted by the Neglect Team within the Office of Attorney General’s Medicaid Fraud Control Section, which works aggressively with local and state authorities to root out and prosecute neglect of Pennsylvania seniors and care-dependent persons.